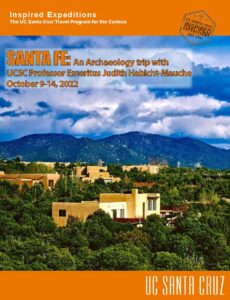 Join UCSC Professor Emeritus Judith A. Habicht-Mauche for an archaeological tour of some of the most fascinating and beautiful sites in and around Santa Fe, New Mexico. The city’s history stretches back thousands of years and has a variety of rich cultural and archaeological heritage, from the Arroyo Hondo Pueblo and the Mesa Prieta Petroglyph Preserve to the Bandelier National Monument and much more! We will also explore the historic and colorful plaza in downtown Santa Fe, with its many shops, galleries, and restaurants and rich mix of Native, Spanish, Mexican, and Western American history and culture.

Please note, all prices are for a standard, double room unless listed otherwise.

*Please note that this is an additional cost.

Trip price is based on a minimum of 15 travelers. Price subject to small group surcharge if group size is under 15.

Independent arrivals in Santa Fe. People will make their own way to the Inn of the Governors where rooms have been reserved for the group

Late afternoon join Dr. Judith Habicht for a tour of the Arroyo Hondo Pueblo which was excavated in the 1970s, by Douglas Schwartz, then director of the School for Advanced Research (SAR). Perched on the edge of the Arroyo Hondo canyon south of Santa Fe, this small pueblo rapidly transformed from a one hundred room hamlet to a one thousand-room pueblo boomtown around 1300 C.E Extensive archaeological research at Arroyo Hondo Pueblo has disclosed wide-ranging details about its origin, rapid growth, the inhabitants’ way of life, pathology, and spirituality, during a period of severe climate change, and regional violence. After 125 years, these forces were intertwined in the town’s demise. Arroyo Hondo Pueblo characterizes the emergence of a new architectural style that helped set in motion the rise of the Classic Rio Grande pueblo pattern.

Enjoy a welcome drink at the home of Dr. Judith Habicht followed by dinner at a local restaurant.

This morning explore the fascinating history behind the beautiful town of Santa Fe on a two-hour walking tour.

Lunch at the Museum Hill Café

This afternoon visit the School for Advanced Research (SAR). Originally founded in 1907 as a center for archaeological research in the Americas, SAR was revitalized in the early 1970s when it relocated to its present 15-acre campus on Santa Fe’s historic east side. Its advanced seminars and resident scholar program in anthropology and related social sciences achieved worldwide recognition, as did the quality of the Southwest Native American art collection housed in SAR’s Indian Arts Research Center. Beginning around 2010, SAR began to reinvent itself yet again. While maintaining its commitment to innovative social science, SAR has pioneered a radically participatory approach to the stewardship of its Native American art collection. It is also expanding and enhancing its educational mission in Santa Fe by offering lectures and salon discussions focused on issues of broad public concern, thus repositioning SAR as a center for creative thought in a region actively exploring new avenues of social and economic development.

This morning join staff at the Mesa Prieta Petroglyph Preserve. Meaning ‘dark mesa’, the preserve is a thirty-six square mile mesa extending twelve miles in a northeasterly direction. Over 100,000 examples of rock images are estimated to exist on the mesa in addition to other archaeological features. Recognizing that the petroglyphs on Mesa Prieta offer an irreplaceable link to the past, an effort to organize a project to survey and record all the petroglyphs on the mesa was initiated in 1999. The organizers of the Mesa Prieta Petroglyph Project realized that the preservation of that history was critical to the area’s quality of life. Since the project began in 1999, about 60,000 petroglyphs and cultural items have been documented The Preserve represents the most concentrated area of petroglyphs on Mesa Prieta and is on the National Register of Historic Places and the State Register of Cultural Properties.

Close by is Vivác Winery, the creation of brothers Jesse and Chris Padberg, along with their wives, Michele and Liliana Padberg. The word “Vivác” is a Spanish term meaning “high-altitude refuge,” and Vivác Winery is just that. The winery uses only the highest-quality products from the best New Mexican grapes, the most advanced winemaking equipment and processes, and real corks, Grapes are hand-harvesting and hand-sorted and the winery uses a gentle bladder pump and gravity feed so as not to bruise the wines. Only high-quality French oak barriques and stainless steel barrels are used for aging. After bottling, these lightly filtered and fined wines rest for 12 months before they are sold. Every winemaking step is done meticulously by hand. The vineyards are farmed organically and with record-breaking ratings in Wine Enthusiast Magazine, Vivác Winery has earned the title of “Highest Rated Red Wine Producer in New Mexico’s History”.

Enjoy lunch at the Rancho de Chimayó which is located in the Chimayó valley, a verdant oasis extending from the foothills of the majestic Sangre de Cristo mountains to the expanse of the Rio Grande valley. Rancho de Chimayó was honored as one of New Mexico’s Culinary Treasures in March 2014, one of only a handful of restaurants awarded with this wonderful distinction.

From here return to Santa Fe stopping at the Pojoaque Pueblo and the Poeh Cultural Center which was established by the Pojoaque Pueblo’s Tribal Council to preserve and revitalize Pueblo communities of the northern Rio Grande Valley. The Poeh Center emphasizes cultural preservation and revitalization through the arts and cultures of all Pueblo People — with a focus on the Tewa-speaking Pueblos of Nambe, Pojoaque, San Ildefonso, San Juan, Santa Clara, and Tesuque; and the Tiwa-speaking Pueblos of Picuris and Taos. Since its inception, the Center’s mission has been to support the future of Pueblo people by teaching the arts, collecting great works of art, and promoting public understanding of, and respect for, Pueblo history and culture.

Meet with Samuel Villarreal Catanach, whose work on language revitalization in Pojoaque Pueblo helps provide a history of the Pueblo and their current struggles. Samuel will also tour the museum with the group.

At leisure for dinner this evening.

Head west today to visit the Bandelier National Monument which protects over 33,000 acres of rugged but beautiful canyon and mesa country as well as evidence of a human presence here going back over 11,000 years. Petroglyphs, dwellings carved into the soft rock cliffs, and standing masonry walls pay tribute to the early days of a culture that still survives in the surrounding communities.

Enjoy a picnic lunch at the beautiful Valles Caldera National Preserve. About 1.25 million years ago, a spectacular volcanic eruption created the 13-mile wide circular depression now known as the Valles Caldera. The preserve is known for its huge mountain meadows, abundant wildlife, and meandering streams. The area also preserves the homeland of ancestral native peoples and embraces a rich ranching history This area was the source of obsidian used by Native peoples since Paleoindian times; widely traded throughout North America.

Return to Santa Fe for an afternoon and evening at leisure.

Dinner at leisure this evening.

Accompanied by Dr. Habicht depart Santa Fe for a day of discovery along the Turquoise Trail.

Galisteo Basin, just southeast of Santa Fe is home to thousands of years of human occupation and was the site of significant ‘cultural contact’ between native Pueblo Indians and Spanish colonizers. Our first stop will be at the San Marcos Pueblo, one of the largest Pueblos in the Southwest (approximately 2,000 rooms) in the 15th and 16th centuries. By the early 17th century, Spanish Jesuits began construction of a mission inside the Pueblo. The mission began in several converted pueblo rooms, but eventually grew into a large two story adobe church and 18-room convento, complete with priests’ quarters, offices, reception area, and kitchen. The mission lasted for approximately 70 years, until the Pueblo Revolt of 1680 resulted in the priest’s deaths and the abandonment of the mission. Unlike other Southwestern missions, however, San Marcos was never re-occupied by the Spanish and remains an important ‘time capsule’ for archaeological research. Schedule permitting the group will be joined by James B. Walker, a New Mexico native and the SW Regional Director and Senior Vice President of The Archaeological Conservancy. (This visit may involve some walking)

Our next stop is at the Cerrillos Hill State Park whose landscape and history has been little disturbed by subsequent activity. You can still see fossil worm tracks in 70 million-year-old shale, a thousand-year-old turquoise pit, the stump of a juniper cut by prospectors 120 years ago, a hawk or coyote just a couple of years old searching for a meal, or this year’s bloom on the chamisa or the cholla. A short hike will bring the group to one or two of the old historic lead mines. Dr. Habicht will talk about her research using lead isotope analysis to study the origin and production of glaze painted pottery in NM. This area is also famous for its turquoise mines –made famous by Tiffany Co. (This visit may involve some walking)

We will include a brief stop at the Casa Grande Trading Station in Cerrillos village where local turquoise jewelry can be purchased.

Enjoy lunch in the village of Madrid, nestled in a narrow canyon in the Ortiz Mountains. Once a historic coal mining town and ghost town, Madrid is now a creative community with some excellent galleries. En route to the San Marcos Pueblo

After lunch visit Tijeras Pueblo and meet with Ms. Danielle Huerta. Tijeras Pueblo had two main construction phases. Tree-ring dates place occupation of the site from AD 1313 to approximately 1425. There is speculation that these peoples were part of the general migration from the Four Corners area (NM, AZ, UT, CO) but there is no evidence to solidly identify any exact previous originating settlement.

Tijeras Pueblo was initially built in the first part of the 14th century to include a main structure consisting of 200 rooms arranged in a U-shape. A large round kiva was built a short distance from the main pueblo rooms. The kiva may have also served members of nearby communities as well as the local village since it is larger than what would usually have been constructed for the size of this village. Archaeological evidence indicates that Tijeras Pueblo was at least partially depopulated in the latter part of the century–perhaps half-occupied at around 1360.

Many adobe walls from the earlier occupation, in a state of neglect, succumbed to weathering and dissolved into the earth. Around 1390, construction resumed. This rebuilding was on a smaller scale than the original. Here, rectangular kivas were incorporated into this “new” construction. The inhabitants continued living here until about 1425, at which time the Pueblo was effectively abandoned. The reasons the population left the site may have been due to drought and related land-use issues.

In the small museum view a recently completed mural designed and painted by Deborah Jojola (Isleta and Jemez Pueblos). The mural depicts the greater Tiwa world as understood during the time of occupation of this site.

We will be accompanied during our time here by Friends of Tijeras Pueblo who will act as docents and facilitate access to the museum.

Make your own way to the airport for flights home… 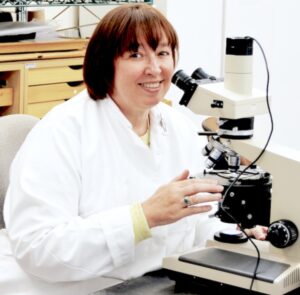 Judith A. Habicht-Mauche is Professor Emeritus of Anthropology at the University of California, Santa Cruz, and currently resides in Santa Fe, New Mexico. Her research interests include the study of the technology, production, and exchange of ancient pottery from the American Southwest and Southern Plains. Her work has appeared in various professional journals including American Antiquity, the Journal of Archaeological Science, Kiva, and Plains Anthropologist, and has been featured in popular magazines, such as American Archaeology and Archaeology Southwest. In 2009, the Society for American Archaeology presented Prof. Habicht-Mauche with its Award for Excellence in Archaeological Analysis, which honors an archaeologist whose “innovative and enduring research has made a significant impact on the discipline.” 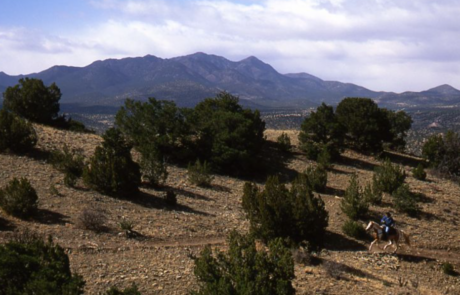 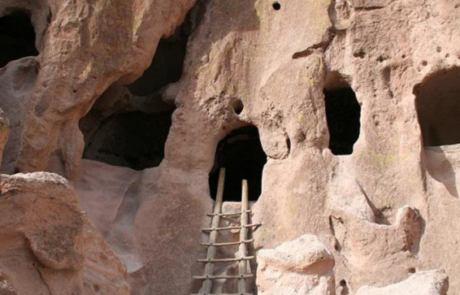 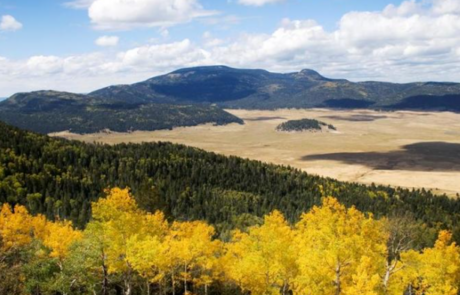 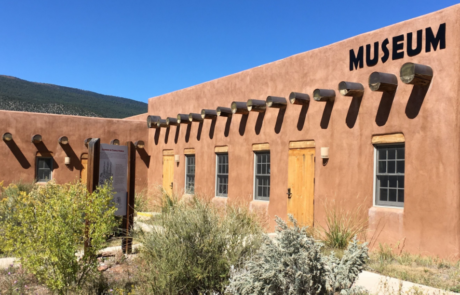 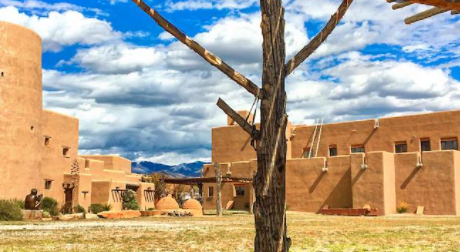